The Black Diamond and the Witch’s Curse

To most people, it appears as if Derek James is a typical college freshman. Yes, he is on a football scholarship at one of the most prestigious universities in the country, but other than that, he appears quite ordinary. But there is an extraordinary secret that Derek is harboring: he is a warlock! When he runs into fellow freshmen Matthias, Omar, and Tre’Vell, he is surprised to learn that they are also warlocks! Shortly after they all meet, however, the freshmen start getting attacked by terrifying monsters. Now, the four fast friends must overcome doubts and disagreements in order to discover the source of the attacks. But it may go deeper than any of them realize. 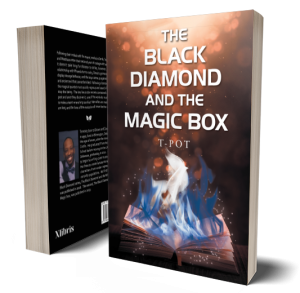 The Black Diamond and the Magic Box

Following their ordeal with the mayor, warlocks Derek, Tre’Vell, Omar and Matthias enter their second year of college with enthusiasm. It doesn’t take long for disaster to strike, however. Matthias’ relationship with Rhonda turns rocky, Derek’s grimoire begins to display strange behavior, and the boys come up against a powerful and ancient evil that cannot be killed. Following a harrowing defeat, the magical quartet must quickly regroup and search for a way to stop the being. The key lies in the secrets contained within their past and once they discover it, one of the warlocks must be willing to make a heart-wrenching sacrifice! New allies are made, old allies are lost, and the lives of the warlocks will never be the same!

The Black Diamond and the Mark from the Source

The Potent Four begin their junior year at Word University still reeling from their encounter with Evelindrith, but there’s no rest for the Wickons! The boys’ powers start to uncontrollably swap, causing much consternation amongst the group. A tricky fellow shows up on their doorstep to deliver a dose of bad news: The exorcism of the demon caused a fracture in the very nature of magic itself that only they can fix! Can they trust this mysterious new player? While this is going on, Omar begins to distance himself from the brotherhood. What—or who—is behind this new direction? And will the Potent Four be able to overcome the mounting complications in their lives to heal the rift in magic using each other’s powers? It’s a supernatural switcheroo with only the world at stake!